Would You Change Your Sex for Your Country?

In honor of the 4th of July, let me share one of my favorite stories of a fiery, patriotic lady in Defiance–of the British!

Lord Cornwallis, the famous British general, once lamented, “We may destroy all the men in America, and we shall still have all we can do to defeat the women.”

In the fall of 1878, Deborah Samson, at the fiery age of 18, enlisted in the Continental Army…as a man. Spending the next three years as Robert Shirtliffe, Deborah did her part to secure liberty and freedom for America. She served in various capacities under Capt. Nathan Thayer and proved herself a capable, willing, and courageous Massachusetts soldier.

Never one to run from a battle, Deborah dove right in with the best and the bravest. She was shot once in the leg, nicked in the head by a British sword, then shot again in the other leg. All three times she refused medical attention so as not to have her ruse discovered. Unfortunately, she came down with a “brain fever” in 1781 and was treated by a Dr. Binney of Philadelphia.

He forthwith moved Deborah to his own home for recovery and sent a note to Capt. Thayer. Upon her recovery, Deborah was called to General Washington’s office. The legends differ here on what exactly happened next. Some say she was asked to deliver papers to the General, at which point he gave her the papers of discharge. Other stories say she delivered the papers, was called back to pick up new dispatches, and then Gen. Washington handed her the discharge papers.

What all the stories agree on is that Washington chose not to publicly reprimand or embarrass Deborah. He handed her the discharge papers, without comment, and also handed her the soldier’s pay due her, and a note of advice. The note was lost to history, but knowing General Washington’s respect for women and his wry sense of humor, it probably said something to the effect of, “Now that you’ve shown my men how to fight, I think it is time you return to the duties of your fair sex. Thank you for your service to your country.”

Eventually, Deborah married a farmer named Gannet and had (naturally) three daughters. Ironically, she named the youngest one Patience.

An American girl after my own heart.

I discovered an astounding statistic the other day. You know I often write blogs about tough, stubborn, gritty women who beat the odds, improvised, adapted, overcame and helped build the country we love. Well, the #1 most read blog I’ve written is, of course, about one of these women–one from the Revolutionary War. Over 15,000 hits! Hmmm. Maybe I’m writing in the wrong genre!

Anyway, if you haven’t yet, check out my take on identifying the heroic and mysterious Agent 355! What a woman. Let me know if you agree with my theory on who she was!

Rachel and Grace Martin — How the Girls With Guns Sent ’em Running! 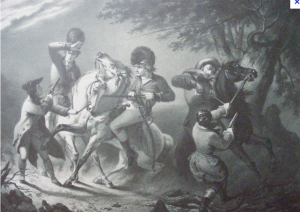 The painting would imply the waylay was more exciting than it actually was.

When it comes to South Carolina’s Revolutionary War history, the men get all the credit. The most famous patriot of them all is, of course, Frances Marion, known as the Swamp Fox, the inspiration behind Mel Gibson’s movie The Patriot.  But as I so often point out, a lot of women during this time didn’t just sit around doing needlepoint while Rome burned, so to speak. On numerous occasions, they took matters into their own hands.

The Martin family of upstate South Carolina was made up of nine children, seven of whom were old enough to enlist in the war in the late 1770’s. Their mother was an ardent supporter of the patriotic cause and must have been beside herself with joy when William and Barkly Martin married Rachel and Grace. These two young ladies were raised with a love of liberty and a hate for the monarchy. British troops had on numerous occasions worked to earn the ladies’ ire.

With their husbands off fighting tyranny, the women kept their ears to the ground for news. And having earned a reputation as steadfast patriots, they often accumulated information that was relevant to the Colonial Army. One evening, they were alerted that a British messenger with dispatches and two guards would be passing nearby. The girls’ husbands were off fighting with Maj. Nathanael Greene, who along with his troops, had 1000 loyalists under siege. There were no men available, therefore, to stop the courier.

Rachel and Grace were having none of that. Those dispatches could well result in the deaths of husbands and brothers. Without delay, they donned their husbands’ clothes, loaded their pistols and waited beside the road. The story goes that the British soldiers were so completely taken by surprise, they never even had a chance to draw their weapons. Without any argument, they surrendered their dispatches and rode off at a gallop, perhaps trying to outrun their humiliation.

Rachel and Grace then delivered the classified papers to a trusted courier who carried them to Major Greene. All in a patriot girl’s day. Feeling pretty satisfied with themselves, as well they should, they changed clothes in the barn and entered their mother-in-law’s home…only to find the three British soldiers sitting around the kitchen table licking their emotional wounds.

But a pretty patriot gal in a well-lit kitchen looks a lot different than a scruffy rebel in a dark forest. The girls weren’t recognized and the soldiers left the next morning.

As always, there is so much more to the story of these girls and their husbands, but they fought hard for the cause, sacrificed much, and lived to see Independence. I thank them both and wonder if I would have the cajones to do the same…

If you’ve enjoyed reading this post, I’d love to have you join me on Facebook. Sounds like we might have a lot in common! Also, please leave me a comment below and let me know what you think about Grace and Rachel.