I got tickled the other day reading a book about pioneer women in South Dakota. Have you ever seen those videos of young tourists doing amazingly stupid things like taking selfies too close to the roaring waves or attempting to feed a buffalo at Yellowstone? Sometimes things go very wrong. 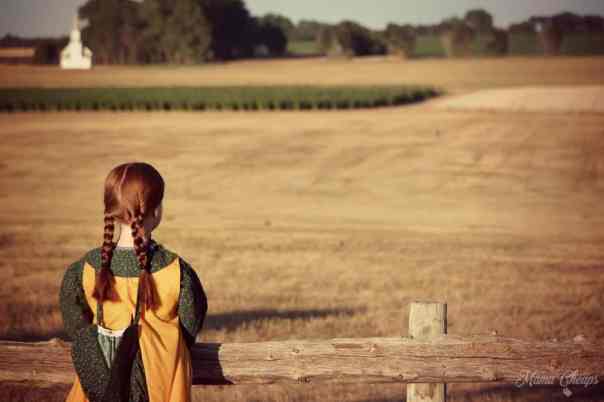 For a pioneer girl, Sadie wasn’t much smarter than some of our modern kiddoes. Back around 1880, she went for a walk on a hot summer day on her farm to pass some time and admire God’s handiwork. Not long into her stroll,  she noticed a nice, plump cluster of grapes hanging over the stream. Simply too tempted to be smart, Sadie started making her way across the swift-moving water by stepping–sometimes streeeetching–from one large rock to the next.

Well, she got a little too intent on watching the current and had a spell of vertigo. Yep, fell headfirst into the water. Years later, she said she could still remember what the bottom of that stream looked like. However, before she even had a chance to panic, she found herself rising to the surface and then being pulled by the collar to the shore. 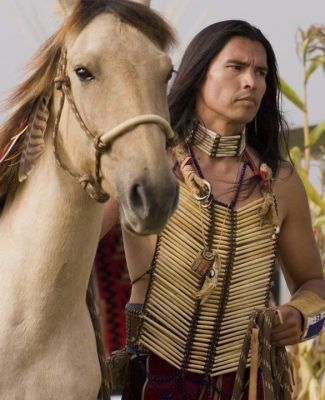 A tall, erect, young Indian boy wrangled her out of the water, snatched her to her feet, then grabbed her shoulders and proceeded to shake her violently. Before she could react to this new danger, the brave disappeared, slipping away into the shadowy forest.

She said for the rest of her life she often wondered what the purpose was of the shaking.

This comment has me thinking maybe Sadie was a bit of a dull bulb. Which could explain how she nearly drowned in the first place.

Well, here’s my best guess, hon, on what the brave who saved your life may have been thinking as he was rattling your brains: “Dumb, dumb, dumb girl. You could have drowned. For what? A handful of grapes? What were you thinking? Go back to your farm and plant something.”

Who’s Your Daddy? The Question Every Shawnee Should Ask Before Abducting A Young Lady

I learned something today in my research into those feisty pioneer women that I just had to share. I knew that the Daniel Day-Lewis movie Last of the Mohicans was based on James Fenimore Cooper’s novel of the same name. What I didn’t know was that the story of white girls kidnapped by Indians was based on the actual event experienced by Jemima Boone, who was rescued by her legendary father, Daniel. 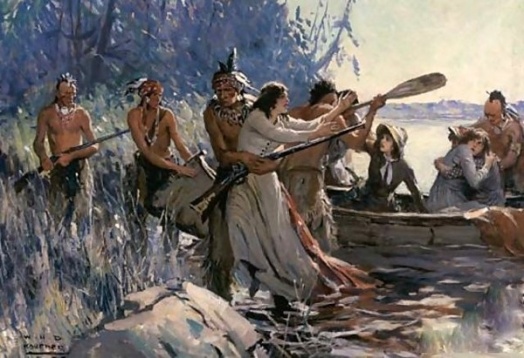 It’s a safe bet the Shawnee thought two young girls alone in a canoe were easy pickings. Hence, they received a good lesson in why a young man should always ask a young lady, “Who’s your daddy?”

The following short article is from a longer History.com article entitled 7 of the Gutsiest Women on the American Frontier. I’ve blogged about nearly all the women on the list but somehow missed Jemima. You should read the whole thing, it’s quite entertaining, but here’s my favorite part: 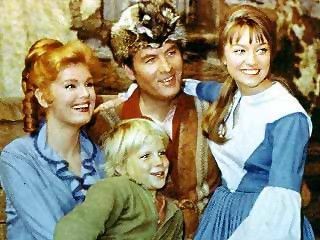 The Hollywood version of the Boones

Rebecca Boone wasn’t the only formidable female in Daniel Boone’s family. His daughter Jemima earned her own spot in the history books on July 14, 1776. That’s when a Cherokee-Shawnee raiding group abducted Jemima, aged 14, along with two other girls while they floated in a canoe near their Kentucky settlement. Demonstrating their own knowledge of frontier ways, the quick-witted teens left trail markers as their captors took them away—bending branches, breaking off twigs and leaving behind leaves and berries.

Their rescue team, led by Daniel Boone himself, took just two days to follow the trail and retrieve the girls. The rescuers included Flanders Callaway, Samuel Henderson and Captain John Holder, each of whom later married one of the kidnapped girls. This event became such an integral part of frontier lore, author James Fenimore Cooper included it in his classic novel The Last of the Mohicans.

Ah, those ladies in defiance. How their legends live on.

She Chose the War Path

Sometimes when I do research, I discover fascinating individuals who led gloriously exciting lives and then retired in peace, children and grandchildren sitting at their feet. The happily ever after. The ending we’d all like. Truth is, though, sometimes a hero has her moment early on and from there it’s not a very pretty spiral downward.

This is my impression of the life of Apache warrior woman Dahteste (pronounced ta-DOT-say).

Born around 1860 she chose her path as a warrior. The Apache let you do that. A fairly open-minded society, you could be a warrior, a homemaker, a medicine man, whatever, as long as you worked at it and could deliver. Dahteste was known for her beauty, but she was also clearly respected for her fighting, riding, hunting, and shooting skills. She was fast and she was mean. No man challenged her light-heartedly. And she proved her worth repeatedly on raids with the Apache. In fact, she rode with Cochise (you might remember him. He led an uprising against the U.S. government that started in 1861 and didn’t end until ’72). Remarkably, Dahteste was barely a teenager! Her fighting didn’t end, however, with Cochise’s acceptance of a peace treaty. She continued it by riding with Geronimo. Who knows how many “white-eyes” lost their lives to her rifle?

Geronimo surrendered in 1886. Dahteste over the years had picked up quite a bit of English, had even served as a cavalry scout for a time, so she negotiated the great chief’s surrender. Her reward? She was arrested and shipped to a prison in Florida where she stayed for eight years. Then she was moved to the military prison at Fort Sill, OK where she was a guest for nineteen years. During her time as a resident of the US Army’s military prison system, she survived pneumonia and tuberculosis. I suspect she survived much more than that.

During this time she divorced her husband Ahnandia (one of Geronimo’s original warriors) and within a few years married fellow inmate and former Army scout Coonie. The couple was released in 1919 and moved to the Mescalero Apache Reservation in New Mexico.

Dahteste, reports say, never spoke English again and wore only beautiful beaded native clothing. She left her long black hair down and unbraided, but always brushed. She was a proud Apache woman who walked with her chin up.

Though she did, indeed, retire with children and grandchildren around her feet, none of them were hers by blood, and she was not generally known to smile much. I hope she spent her final years enjoying peace and happiness, but I don’t get that sense. I think Dahteste was a survivor and she did so with more grim determination than optimism.

Posted in A Promise in Defiance, Ask Me To Marry You, Grace be a Lady, Guest Post, Hang Your Heart on Christmas, Heather Blanton, Ladies in Defiance, Love, veterans

No, Not a Happy Ending for this Lady in Defiance…or Was it? 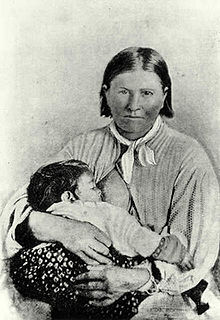 Cynthia and her daughter Topsannah after their capture in 1861. Cynthia, believing her husband Nocona was dead, had cut her hair per Comanche mourning rituals.

I tend to stay away from stories of women that don’t have happy endings. But is it a disservice to ignore the gals who slogged on through life’s hardships, bent but not broken, till God called them home? Honestly, yes. So allow me to introduce you to Cynthia Ann Parker.

At the age nine or ten, Cynthia moved from Illinois with her family to Central Texas. A year or so later, in 1836, she and four others, including her brother John, were kidnapped by Comanches. In the next few years, her fellow captives returned to the White Man’s World, but Cynthia didn’t. Though she had an opportunity to leave with John sometime in the 1840’s, she refused. Cynthia Parker had gone Native and was committed to her Comanche family.

In 1846 federal troops were surprised to discover a blue-eyed white woman living with Comanches along the Canadian River. Naturally, being magnanimous public servants, they sought to “bargain” for Cynthia’s release. The tribal elders refused. Cynthia was again spotted by government officials in the late 1840’s. By this time, though, she had married Chief Peta Nocona and given him three children. She had no intention of going anywhere. Agreeing, Nocona warned the government they wouldn’t take his family without a fight. The government backed off.

Cynthia lived in peace with her family for years after that, but the battles between Comanches and Whites escalated. In 1860, Texas Rangers attacked a hunting party at Mule Creek. Imagine the Rangers surprise when they discovered that pale skin and piercing blue eyes. Taken back to the white man’s world, Cynthia was later recognized by her uncle, Col. Isaac Parker. He relocated her and her baby daughter to Birdville, with a promise that if her sons Quanah and Pecos were found, they would be brought to her.

Cynthia made more than one attempt to “escape” from civilized society, but failed. Eventually, she settled at her sister’s farm, in the vicinity of Palestine, TX. Her daughter Topsana (Prairie Flower) died during this new captivity in 1863 or ‘64. Miserable with this new life and uncomfortable with the national attention, Cynthia faded away and died in 1871. She was only 45 or so. In those last years, she never saw her boys.

Cynthia’s legacy, of course, is her oldest son. Quanah raged against the machine, becoming a great warrior and leader. But we all know how the Indian Wars ended. With the handwriting on the wall, he surrendered in 1875 and helped settle his people on the Kiowa-Comanche-Apache Reservation, where the US Government appointed him chief. He embraced certain aspects of white culture, learned English, made smart investments, and hunted with President Roosevelt.

Cynthia had given her son the tools for surviving in a white world and Quanah never forget his mother. In 1910, he had her body moved from TX to Oklahoma. A year later, he joined her in the Post Oak Mission Cemetery.