Jack Colton : My minimum price for taking a stranded lady to a telephone is 400 dollars.

Joan Wilder : Will you take 375 in traveler’s checks?

Jack Colton : You’ve got a deal.

You probably recognize those lines from one fabulous romantic comedy, Romancing the Stone. So what does that have to do with my blog post today? Barely anything at all. I just love that movie.

NOW, HAVING SAID THAT, I would like to offer a FREE book in exchange for an HONEST review. No traveler’s checks needed! FREE. FREE. FREE. Other than the investment of your time.

The first 20 people to comment below, I’ll send you a link for YOUR FREE ECOPY of Mail-Order Deception! A stand-alone mystery romance in my Brides of Evergreen series.

And if you have a favorite quote from Romancing the Stone, I’d love to hear it!

God help the man who ever gets in her way again…

YOU KNOW MY STYLE OF WRITING—strong heroines who don’t mess around. They roll up their sleeves and get the job done. I love the stories of women who persevere and overcome, so you can imagine how much I enjoyed writing Hell-Bent on Blessings. It releases on Feb. 14 but you can pre-order TODAY for only .99! 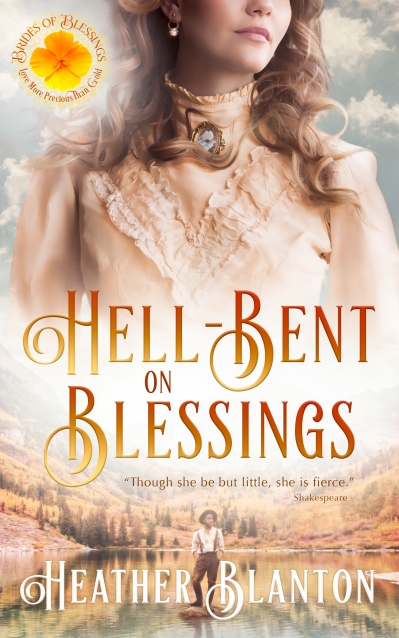 Harriet’s worthless husband has snatched the world out from under her feet, and then gone and died on her, to boot. First, though, he left her in deep debt and facing foreclosure on the ranch that she loves almost as much as her own children. Livid, staring at bankruptcy and fighting hopelessness, she grits her teeth and comes up with a plan. Money, gold, and jobs are abundant in the boom town of Blessings, California. She’ll start over there, taking one step at a time to rebuild a life with her children, her financial independence, and her dreams of a new ranch.

God help the man who ever gets in her way again… Like Shakespeare warned, “Though she be but little, she is fierce.”

Jason Meredith, an old friend, has a few things he’d like to say to Harriet, especially now that she’s a widow. He might have better luck surviving a bear attack, though, than thawing her frozen heart. He’s got his work cut out for him, but Jason’s a patient man. At least, he used to think he was… 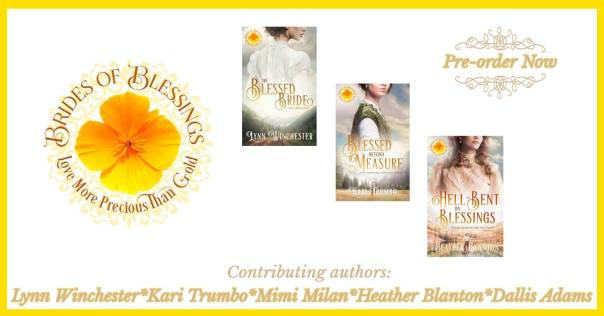 Get your copies today!

Announcing, the Brides of Blessings…

The California Gold Rush—when Gold Fever spread across America, it emptied towns, stripped ships of their crews, left women husbandless, children fatherless. The stories, especially of the women who sought to make their own fortunes, are awe-inspiring and, in some instances, flat-out amazing.

And I’m thrilled to tell you I’m in a new series focused on the Gold Rush era–the Brides of Blessings looks at the women of the California Gold Rush, spanning the years from 1848 to 1865. I have joined up with best-selling authors Lynn Winchester, Mimi Milan, Kari Trumbo, and Dallis Adams to share with you these richly researched, clean, inspirational historical western stories. In the vein of the inimitable Dr. Quinn Medicine Woman, both the beloved town and its people grow as the women help settle the west and find their “happily ever afters.” I hope you’ll pick up your copy of The Blessed Bride for the special pre-order price of only 99 cents. http://amzn.to/2hyuAUi