Would You Change Your Sex for Your Country?

In honor of the 4th of July, let me share one of my favorite stories of a fiery, patriotic lady in Defiance–of the British!

Lord Cornwallis, the famous British general, once lamented, “We may destroy all the men in America, and we shall still have all we can do to defeat the women.”

In the fall of 1878, Deborah Samson, at the fiery age of 18, enlisted in the Continental Army…as a man. Spending the next three years as Robert Shirtliffe, Deborah did her part to secure liberty and freedom for America. She served in various capacities under Capt. Nathan Thayer and proved herself a capable, willing, and courageous Massachusetts soldier.

Never one to run from a battle, Deborah dove right in with the best and the bravest. She was shot once in the leg, nicked in the head by a British sword, then shot again in the other leg. All three times she refused medical attention so as not to have her ruse discovered. Unfortunately, she came down with a “brain fever” in 1781 and was treated by a Dr. Binney of Philadelphia.

He forthwith moved Deborah to his own home for recovery and sent a note to Capt. Thayer. Upon her recovery, Deborah was called to General Washington’s office. The legends differ here on what exactly happened next. Some say she was asked to deliver papers to the General, at which point he gave her the papers of discharge. Other stories say she delivered the papers, was called back to pick up new dispatches, and then Gen. Washington handed her the discharge papers.

What all the stories agree on is that Washington chose not to publicly reprimand or embarrass Deborah. He handed her the discharge papers, without comment, and also handed her the soldier’s pay due her, and a note of advice. The note was lost to history, but knowing General Washington’s respect for women and his wry sense of humor, it probably said something to the effect of, “Now that you’ve shown my men how to fight, I think it is time you return to the duties of your fair sex. Thank you for your service to your country.”

Eventually, Deborah married a farmer named Gannet and had (naturally) three daughters. Ironically, she named the youngest one Patience.

An American girl after my own heart.

Jack Colton : My minimum price for taking a stranded lady to a telephone is 400 dollars.

Joan Wilder : Will you take 375 in traveler’s checks?

Jack Colton : You’ve got a deal.

You probably recognize those lines from one fabulous romantic comedy, Romancing the Stone. So what does that have to do with my blog post today? Barely anything at all. I just love that movie.

NOW, HAVING SAID THAT, I would like to offer a FREE book in exchange for an HONEST review. No traveler’s checks needed! FREE. FREE. FREE. Other than the investment of your time.

The first 20 people to comment below, I’ll send you a link for YOUR FREE ECOPY of Mail-Order Deception! A stand-alone mystery romance in my Brides of Evergreen series.

And if you have a favorite quote from Romancing the Stone, I’d love to hear it! 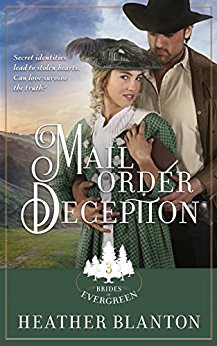 Mary Katherine Goddard — Daughter of the Revolution and Forerunner to Lois Lane?

Sometimes, the pen is mightier than the sword.

Some women during the Revolutionary War did amazingly brave things. These women warriors rose to the level of their challenges and met them head on. But not every woman took a rifle in hand to make a fight. Mary Katherine Goddard, arguably the first female journalist of the Revolutionary War, fought with ink and paper.

In 1762, 24-year-old Mary Katherine moved with her younger brother and mother to Rhode Island. Brother William had finished an apprenticeship in printing and planned on starting a print shop and newspaper. Together the family published the Providence Gazette. Mary Katherine was a quick study, though. After William established an additional shop and newspaper in Philadelphia, he turned that store over to his sister in 1764.

Philadelphia was a hot-bed of Colonial rebellion. Mary Katherine reported it with a fair and balanced approach, despite the fact that her brother was rabidly anti-British. He was repeatedly jailed for outbursts and printed tirades against the crown. In 1774, Mary Katherine took over her brother’s paper in Baltimore while he attended to other interests, including trying to set up a postal system in opposition to the official British mail service.

In January of 1777, Mary Katherine courageously used her press to print copies of the Declaration of Independence, only the second publisher to do so and the first to print all the names of the signatories. Considering the times, this was arguably a treasonous act. She was also the first female appointed as a postmaster in Colonial America. She served in that capacity for the city of Baltimore from 1775 to 1789. It’s worth mentioning that Mary Katherine never missed an edition of the Maryland Journal from 1775 to 1784. In the midst of war, when lesser papers folded or went into hiding, the city’s government switched hands, and battles raged, she kept the presses rolling, so to speak.

It wasn’t all daisies and sunshine for May Katherine, though. In 1784, her name disappeared from the masthead of the Maryland Journal, and in 1789 she was forced to step down from her position as Postmaster (despite a petition signed by over 200 Baltimore merchants to keep her). The issues? Her brother was jealous of her success (he hadn’t accomplished a thing in his life that Mary Katherine didn’t bring about), and she was a woman without the appropriate friends in high places. Infuriating, yes, but I suspect Mary Katherine did all right. She ran her own bookstore in Baltimore till her death in 1816. Nobody really remembers her brother or the man who replaced her as Postmaster. There’s some justice in that.