Cattle Kate: a Prostitute and Rustler or Just a Woman so Unwilling to Bend She had to be Broken? 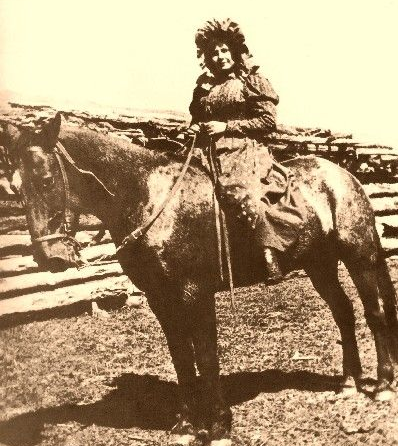 Bet SHE never used a side-saddle.

The thing about history that makes me crazy is that we can’t know, short of letters or diaries, what made a person tick. I try hard to read between the lines when I study someone so that I may question with boldness common assumptions. So is the case with “Cattle Kate”, the first woman lynched in Wyoming. Her life story was defined for us by greedy cattle barons and dutifully reported by a cowardly, boot-licking press. According to these men, Ella was a prostitute, a cattle thief, and a fornicator. She traded sex for cows and had no compunctions about doing a little cattle rustling on the side.

More likely, she was a woman with a brain in her head and a fire in her eye.

At 18 Ella married an abusive drunk who beat her with a horse whip. She put it up with it for four years, then left the loser and filed for divorce. Truly a rare thing in 1883. Strong-willed and stubborn, Ella stayed with her family only a few months then moved out on her own. Maybe she’d had enough of the men in her life trying to run things for her? Life took her from Nebraska, to Denver, to, finally, fatefully, Wyoming. She made her living alternately as a seamstress and cook. There is no evidence she ever worked as a prostitute at any time in her life.

She met Jim Averill while she was cooking at the Rawlins House. Jim had a road ranch on his homestead, catering to travelers and cowboys. Ella worked as his cook and was paid for her time. She eventually bought her own land, started her own ranch, and acquired her own legally registered brand. She and Jim did apply for a marriage license in 1886, but never filed it. It was common knowledge they had a relationship, but the intricacies of it were known only to them. Ella also took in two young boys who came from abusive homes and they worked her ranch for her.

Ella’s ranching activities brought her into direct conflict with the Wyoming Stock Growers Association. For nearly two years, she and Jim were threatened, harassed and watched incessantly by riders from the WSGA. Not interested in backing down, Jim wrote fiery letters to the newspapers, decrying the greed and tyranny of the cattle barons. The cattle barons were appalled by these two cheeky colonials and determined to make an example of them for all the other up-start ranchers.

On July 20, 1889, Ella and Jim were accused of rustling cattle from a neighbor’s ranch. Riders took the couple to a gulch and hung them from a stunted pine, not more than two feet off the ground. Evidence suggests they didn’t go down (or up) without one whale of a fight.

At the time of her death, Ella had 41 head of cattle, a little over 300 acres, and a tenacious fighting spirit that burnt bright right up to the last second of her life. If there is any justice here, it is that we remember her to this day, not the cowards who hung her.