Say, Where’d You Get Those Bloomers, Amelia?

Suffrage and Temperance? No, no, no. Let’s talk Bloomers! 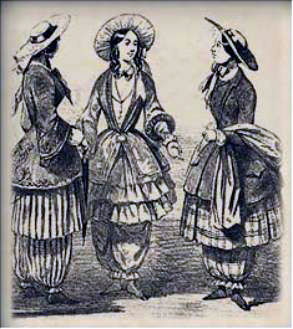 This was supposed to be better than a dress?

In American history, you have women who spied for this country, loaded cannons during heated battles, fought wild Indians, ventured alone to rowdy frontier towns.

And then there is Amelia Bloomer.

A native of New York, Amelia was the first woman to own, edit, and operate a newspaper in the United States. The Lily was started in 1849 for the reading pleasure of the Seneca Falls Ladies Temperance Society. By 1850, the circulation of 4000 had started to decline and Amelia took over the editorial helm. She had found her groove. She loved espousing her views on suffrage, temperance, morality, and fashion.

Married to an attorney who was apparently patient and supportive, Amelia freely championed the cause of suffrage all over the country. She spoke, attended rallies, organized committees, and hung with the likes of Susan B. Anthony and Elizabeth Cady. If not for her, her newspaper, and her enthusiasm, who knows how long it would have been before we women would have attained the right to vote?

But is that why you know the name Bloomer?

In 1851, a few notable women started wearing loose, baggy pants that gathered at the ankles. The style was based on pants women wore in the Middle East. Amelia fell in love with the roomy, flowing pants. She adored that they allowed one to move so freely, climb steps without tripping, and keep her hands free. Never mind that the things are about as attractive as a clown suit.

But Amelia adored the goofy breeches and pushed them every chance she got. They were frequently mentioned in The Lily, to the point the I-Dream-of-Jeannie breeches finally earned the nickname Bloomers.

Ah, the lasting contribution of a Lady in Defiance.