When it’s all Coming Apart — Bake a Pie in Alaska 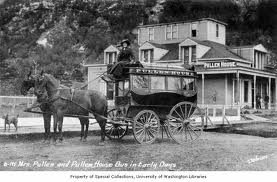 Harriet in front of her hotel with her new stagecoach.

Feeling a little low today? Like the world is sucker-punching you? Well, you can mope…or you can fight. Learn a lesson from a true lady in defiance.

“I only had seven dollars to my name. I didn’t know a soul in Alaska. I had no place to go. So I stood on the beach in the rain, while tented Skagway of 1897 shouted, cursed, and surged about me.”

Abandoned and nearly bankrupted by her husband, Harriet Pullen pulled herself up by her bootstraps and vowed to make a living somehow. To get started, she placed her four children with friends in Seattle and headed north to Alaska to look for work. Her desperation for employment must have shown on her face because only moments after making it to the beach, a man tapped her on the shoulder and asked her if she could cook.

Capt. William Moore was building a wharf and had a crew of eighteen hungry men, a kitchen, and a problem. To his dismay, and Harriet’s good fortune, the cook had run off. With grim determination, Harriet rolled up her sleeves. But she couldn’t stand up. Moore’s “kitchen” consisted of a tarp pulled across some logs that, because of hanging hams and heavy sides of bacon, drooped so low she literally had to bend over to cook. Adding to the misery, the previous chef had left the dirt floor littered with food scraps and a table buried under a mountain of dirty plates.

Harriet said she broke down and sobbed when she saw the mess. I suspect it was the last time she cried over her situation.

By dusk, she had scrubbed the dishes with ashes from the fire, cooked a mouth-watering meal, baked apple pies for dessert…and earned her first $3.00 in Skagway. Not to mention applause from the crew.

It didn’t take her long to earn enough money to have her three young sons join her (the daughter stayed in Seattle as Skagway was no place for ladies—of any age). It also didn’t take her long to realize $3.00 a day was not enough for her and her boys to live on. So she started baking pies…at night…after working all day to feed the crew of eighteen carpenters. She baked hundreds of pies and sold them to miners and a local restaurant. She not only made enough money doing this to take care of her family, the funds made it possible for Harriet to ship seven of her horses up from Seattle.

Harriet used the horses to pack freight over the notorious White Pass Trail, lovingly nicknamed by the locals The Worst Trail This Side of Hell. It was a wee bit steep, to say the least. Harriet was the only woman EVER to move freight over it. She did so quite successfully and word got around. So maybe it was no surprise her worthless husband showed up during this time. He didn’t stay long, choosing instead to brave the cold temperatures of the Klondike rather than the chill in Skagway.

When the railroad finally made pack mules obsolete, our heroine still managed to land on her feet. She bought a big house, rented out the rooms, and sold her pies. The Pullen House eventually became one of the most famous hotels in Alaska.

Harriet never re-married and raised four good kids on her own, two of them war heroes. This “Mother of the North” died in 1947. Probably with her boots on. So no matter what is going on in your life, I suggest first that you pray, and then roll up your sleeves and get to work.