Fearfully and Wonderfully Made? You Have No Idea…

It has been accepted since the experiments of Wilder Penfield back in the fifties, that hidden away in each of us is a permanent record of our past. 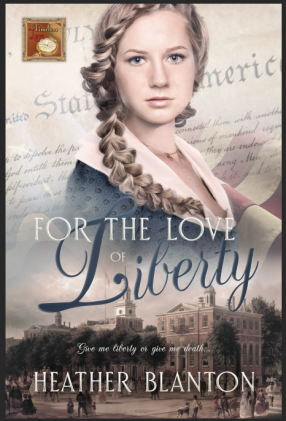 If you could live an ancestor’s memory, what would you experience? Could you mistake the recollection for reincarnation? Could you lose yourself in the memories…

Travel back in time, as it were?

And keep reading for a sneak peek!

My newest release, For the Love of Liberty, is a flight of fancy—a story in which time and space, spirit and soul all mingle together. This tale is inspired by my fascination with something called Genetic Memory. Several years ago I read an article about a newspaper reporter who was obsessed with all things Italian—food,  fashion, art, architecture. Not so odd, except no one in her family was Italian. Determined to find the root of this odd preoccupation, she did a little research and discovered she did, indeed, have Italian ancestors.

There’s more. Emory University did a study in which mice were trained to avoid a certain smell—cherry blossom. Sure enough, the offspring avoided the smell as well, without training.

Yes, aversions and feelings are a far cry from experiencing an actual memory, but the secrets DNA might hold certainly are intriguing. We are fearfully and wonderfully made. I think DNA studies have only begun to scratch the surface of what humans share. This might even be the explanation for what some call “reincarnation.” Which I don’t believe in.

So, what if we mix genetic memory theories with Einstein’s Theory of Relativity? Barriers between dimensions collapse and the Space-Time Continuum sprouts branches—thousands, maybe millions of branches. Anyone who knows God in a real, personal way accepts that He is the ultimate power in the universe. And with him, all things are possible.

I hope you’ll check out my new release, For the Love of Liberty. Star-crossed lovers hundreds of years apart–or are they? Book 4 in the (stand-alone) Timeless Love series!

There are more things in heaven and earth, Horatio,

Than are dreamt of in your philosophy.

Now for a little sneak peek:

Liberty opened her eyes. One moment she was in Talbot’s chair, and the next she was standing on a dirt road. No. She looked to her left. This was a back street. She could see the rear of houses and businesses. Some brick and some clapboard buildings, Georgian style, a few with white picket fences enclosing small yards. To her right, fields of dry corn stalks and tobacco stubs shuddered with the cool, dry breeze. Beyond them, smoke drifted from half a dozen distant farmhouse chimneys. Above, a brilliant, cloudless sapphire sky stretched from horizon to horizon.

Elated over being here again, and getting dizzy with the emotion, she forced her breathing to slow. But the question struck her, back where? The slow, heavy gong of a cowbell was swallowed by the rumble of wagon wheels on a cobblestone street not far away. A hundred feet up, a man emerged from a barn-like structure, rolling a mammoth barrel into the light. He parked it, disappeared, emerged a moment later, manhandling another.

Approaching slowly, Liberty noted with appreciation the muscles rippling beneath the man’s muslin shirt as he wrestled the barrel along, beige breeches pulling taught over his thighs with the effort. Thick, defined calves strained against his stockings. She had to admit he filled out the Colonial clothing quite nicely. And while she’d never cared for a ponytail on a man, his raven-black hair looked natural pulled back with a leather tie.

She blinked, surprised at herself and regained her focus. How could she ask him where she was without sounding like a village idiot? As if suddenly sensing her presence, the man straightened, turned, and their eyes met. She would have sworn electricity arced between them and she gasped. Then she recognized the face.

Posted on July 11, 2018, in Ladies in Defiance. Bookmark the permalink. Leave a comment.