She Chose the War Path 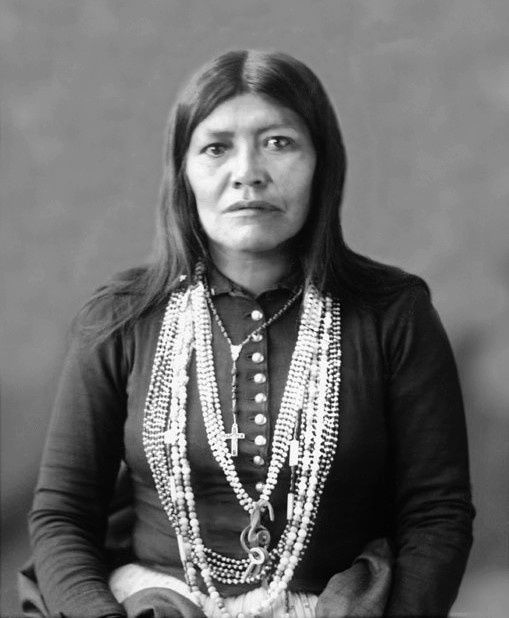 Sometimes when I do research, I discover fascinating individuals who led gloriously exciting lives and then retired in peace, children and grandchildren sitting at their feet. The happily ever after. The ending we’d all like. Truth is, though, sometimes a hero has her moment early on and from there it’s not a very pretty spiral downward.

This is my impression of the life of Apache warrior woman Dahteste (pronounced ta-DOT-say).

Born around 1860 she chose her path as a warrior. The Apache let you do that. A fairly open-minded society, you could be a warrior, a homemaker, a medicine man, whatever, as long as you worked at it and could deliver. Dahteste was known for her beauty, but she was also clearly respected for her fighting, riding, hunting, and shooting skills. She was fast and she was mean. No man challenged her light-heartedly. And she proved her worth repeatedly on raids with the Apache. In fact, she rode with Cochise (you might remember him. He led an uprising against the U.S. government that started in 1861 and didn’t end until ’72). Remarkably, Dahteste was barely a teenager! Her fighting didn’t end, however, with Cochise’s acceptance of a peace treaty. She continued it by riding with Geronimo. Who knows how many “white-eyes” lost their lives to her rifle?

Geronimo surrendered in 1886. Dahteste over the years had picked up quite a bit of English, had even served as a cavalry scout for a time, so she negotiated the great chief’s surrender. Her reward? She was arrested and shipped to a prison in Florida where she stayed for eight years. Then she was moved to the military prison at Fort Sill, OK where she was a guest for nineteen years. During her time as a resident of the US Army’s military prison system, she survived pneumonia and tuberculosis. I suspect she survived much more than that.

During this time she divorced her husband Ahnandia (one of Geronimo’s original warriors) and within a few years married fellow inmate and former Army scout Coonie. The couple was released in 1919 and moved to the Mescalero Apache Reservation in New Mexico.

Dahteste, reports say, never spoke English again and wore only beautiful beaded native clothing. She left her long black hair down and unbraided, but always brushed. She was a proud Apache woman who walked with her chin up.

Though she did, indeed, retire with children and grandchildren around her feet, none of them were hers by blood, and she was not generally known to smile much. I hope she spent her final years enjoying peace and happiness, but I don’t get that sense. I think Dahteste was a survivor and she did so with more grim determination than optimism.