Welcome to the Your Lucky Day Giveaway Hop brought to you by The Hopping Bloggers!

Hosted By: Mama Smith’s & Women and Their Pretties

Each giveaway has a value of a minimum of $15, however some are worth much more. Be sure to enter to win all of them because there is no limit to how many you can win. GOOD LUCK! 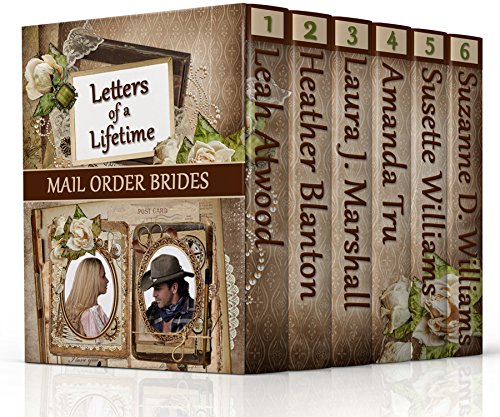 UNLIKELY SUBSTITUTE by Leah Atwood
Once widowed, once duped Anne Marie Meadows has no desire to be married, but she is down to her last option. In order to save her farm, she sends for a mail-order husband.

U.S. Marshal Jude Malstrom is a loner dedicated to his work, but when a dying man asks him to deliver a letter, he reluctantly carries out the task.

When nature unleashes her fury, Jude and Anne Marie find themselves in each other’s company for longer than they wish. Can they see beyond obligation and find an unlikely love?

ASK ME TO MARRY YOU by Heather Blanton
Loath to admit it, Audra Drysdale needs a man to save her ranch. Her father has passed away and her hands are abandoning her like rats from a sinking ship. Worse, a neighboring cattle baron is making a play for the Diamond D AND Audra, whichever he can get his hands on first.

Dillon Pine is in jail for a conspiracy charge, but because of certain mitigating factors he’s deemed a good risk for an unusual form of probation: serving as Audra’s husband.

When Audra discovers her father’s death was no accident, she realizes her new husband is in danger, too. To save Dillon, she may have to let go of the one thing she’s fought her whole life to keep.

THE RANGER’S UNEXPECTED BRIDE by Laura J. Marshall
1870 Comanche, Texas – Justice Ryder, Captain of the Texas Rangers, a man who is not accustomed to being unsure of anything is not quite certain what to make of his mother’s outrageous matchmaking scheme.

Blueblood Diana Carrington, the embodiment of that scheme, travels across the country with high hopes, but an encounter before she arrives in town complicates everything.

THE SECRET BRIDE SOCIETY by Amanda Tru
The town of Secret is getting a pastor’s wife. And the only one who doesn’t know is the groom!

Leah Barton is concerned when she overhears a covert meeting of church members, What could the congregation be plotting, especially if the pastor isn’t invited? When the church’s plan takes an unexpected twist, Leah must decide whose opinion matters most to her. Will she be content with a life and reputation dictated by others, or will she be open to a future, and a love that require her to learn and step forward in faith? And how will she convince all of Secret that the greatest danger to their future just may be a well-meaning congregation?

JESSIE’S BRIDE by Susette Williams, USA Today Best Selling Author
Jessie Kincaid doesn’t plan to follow in his older brothers’ footsteps, which seems to include being bachelors. There might be twice as many men as women in their town, but there are still other ways to go about finding a wife.

Jessie begins writing Sarah Engle in hopes that she will become his mail order bride. Even though there are miles between them, he feels connected to her. He sends her money, along with a stage coach ticket, to come see him so that they can be married.

Not everyone is happy with their decision to wed. When the preacher said, till death do you part, did he mean literally? Or can a mail order bride and her groom truly have a happily ever after ending?

A MAIL ORDER BRIDE FOR CHRISTMAS by Suzanne D. Williams
Lafayette Faulkenberg advertised for a bride, one of plain countenance, able to cook, clean, and sew. But his wish for a woman to tend his house did not come with plans to share his heart.

Pigeon Burgess was headed west to marry an older man when a tragic ferry accident took the life of a woman she’d met on the train. Taking the woman’s name as hers, she switched places. Better to marry the man the woman had raved about than be locked into something she’d hate. Yet, ex-minister, Lafayette has a tragic secret, one that eats at him night and day, and his self-hatred, combined with her ever-expanding lie, prove to be volatile. Unless the grace of a loving God turns their hearts toward the forgiving power of love.

The e-book giveaway of Mail Order Brides: Letters of a Lifetime is open internationally. Enter through the Rafflecopter link below: