A big Welcome to Staci Stallings!
A stay-at-home mom with a husband, three kids and a writing addiction on the side, Staci Stallings has numerous titles for readers to choose from. Not content to stay in one genre and write it to death, Staci’s stories run the gamut from young adult to adult, from motivational and inspirational to full-out Christian and back again. Every title is a new adventure! That’s what keeps Staci writing and you reading. 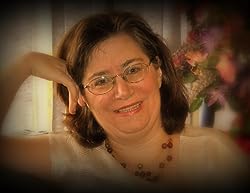 Our world today sets certain expectations on us. When we talk of “romance,” most people equate that with going to bed with someone. They think that you “fall in love” physically, and the attraction they promote especially in movies romance novels is more about one-night stands than ‘til death do us part. So I believe any lady who keeps to God’s standards in the face of this onslaught is truly a “Lady in Defiance.”

One such lady is Maggie Montgomery in my book “Deep in the Heart.” Now on the outside, Maggie is no sword-wielding heroine. In fact, she is quite meek and actually very unsure of herself. She would never, ever think herself a lady in defiance, but she, in fact, truly is.  Her very heart sets her apart from the world’s definition of what a woman “should” be.  She is not grasping, devious or manipulative. Instead, her heart is always on helping and giving the people in her world the love she once received when circumstances tried to throw her to the wolves. Because she is so aptly able to stand in God’s grace no matter what, she attracts the attention and then the admiration and finally the love of Houston’s richest heir-to-be, Keith Ayers, but he’s already been seduced by the world. Can Maggie’s defiance and steadfast faith change him for the better, or has the world already won?

What real-life “Lady in Defiance” has impacted your life or writing?

I think the women I spend my time with show me every day how to be “defiant” in the face of all the lies the world tries to tell us.  I have young women, just starting out in college, who do not fall for what the world says they should do—partying and relationships based on physical interactions. I have friends who are older, keeping families together and being wise mentors for the next generations. I have friends who are navigating the choppy waters of marriage and children—being God-fearing, faith-filled women in an era of do-whatever-you-want and throw away relationships. All of these women inspire me every single day!

When did you know you wanted to be an author? What happened to your very first story you ever wrote?

When I was in second grade, I wrote a story for Christmas about Rudolph the Red-Nosed Reindeer. My teacher at the time, Sr. Adrian, was an amazing person, and we all thought she hung the moon at night and raised the sun every morning. At the top of my story, she wrote, “Wow. You’re going to be a writer!”  And if Sr. Adrian said it, well, that was it because she knew EVERYTHING!

The first novel I ever wrote was when I was in eighth grade. It was for a contest (don’t even remember anything else about the contest though).  I wrote the story out long-hand as I did not know how to type at the time, and my friend (God bless her!) who was three years older typed the whole thing out for me on one of the school’s electronic typewriters.  I still have the longhand version. The typed version is long gone.  I’ll never do anything with it as that story featured many of my own classmates by name, but it was an actual full-length novel, which is quite impressive for an eighth grader.

My first “real” novel that I wrote 20 years ago is currently in a new boxed set called Whispers of Love with 11 other brand-new novels by some of today’s best Contemporary Christian authors. It’s on preorder and will be released June 28.  Hard to believe that story which was written before contemporary Christian romance was even a genre will now be available. I guess that makes me a lady in defiance as well because when I wrote that book, everyone laughed at me because “Christian romance?  What’s THAT? Christians don’t have romance! Oh, well, in historicals they might, but not in contemporary stories!”  Oh, yeah?  Well, I guess I showed them! 

Where do you get the inspiration for your heroes and heroines? Are they based on real life people?

Many of them come to me in dreams. When I was very young, I used to tell myself stories to put myself to sleep.  It was like selecting a favorite DVD, putting it in the “player” in my head and pushing play.  I would “watch” or make up the story until I fell asleep.  Most of the time the jumping off point for these stories was a dream I’d recently had.  I didn’t know I was literally training myself to write, but that’s what I ended up doing.  In fact, I often think that my heroes and heroines come to me to tell their story and work out what they need to find peace.  I don’t think of them as “characters” but more as real people.  In fact, I’ve actually met a few of them in real life after I wrote them.  There will always be differences of course… he’s a dentist rather than a doctor and his name’s not Scott.  Or her mother’s been gone only a year rather than the five it was in the book. But I’ll be happily living my life, and all of a sudden, there is someone I wrote about. Those moments are often very surreal to me, and for years, I didn’t even tell other people they were happening.  When I did let others know, they were often as freaked out as I always was. But it is nice to know I’m not actually crazy! (Well, I hope I’m not!)

Do you feel like you’ve arrived at being a writer? How do you measure success both professionally and personally?

I don’t know that I’ve arrived at being a writer so much as I’m much closer to arriving as a person. For years and years, I hungered for validation of everything I did. I couldn’t exist without someone saying I’d done a good job—and that very nearly killed me.  Over the course of the last 11 years, God has done extensive work on my heart, and I’ve come to the conclusion that HIS approval and love is all I really need, and I have those in abundance.  So I’ve been able to let go and let God direct and guide my steps rather than me frantically chasing after things I think will make me “successful.”

Because of that, I have seen my books on the top of the charts multiple times.  I have seen my share of amazing reviews and heard the stories of people whose lives were literally changed by reading the stories God gave me to write.  It’s funny too because for years people in the industry told me I had to change the way I wrote and the stories I wrote to have a chance at being published. God, however, told me not to worry about that and to keep writing, which I did.  Little did I know that He already could see 2011 when the ebook revolution hit, and indie publishing came into its own as a force to be reckoned with.

Does that make me a Lady in Defiance? I think it just might!

A Work in Progress  http://www.amazon.com/Work-Progress-Contemporary-Christian-Romance-ebook/dp/B004JN05KY

99cent book
Deep in the Heart at Amazon

Posted on April 20, 2016, in Guest Post, Ladies in Defiance and tagged a lady in defiance. Bookmark the permalink. 4 Comments.