She could have been more than she was. Rowena dug her toes into the cold sand, wrapped her wool-clad arms around her tweed-clad knees, and stared out into the clear, fathomless waters of Loch Morar.

Rowena Kinnaird, heroine of The Reluctant Duchess, never set out to be strong. She didn’t set out to defy her father. She never expected to challenge anyone or anything. Rowena Kinnaird, daughter and heir of a Highland chief who also bore the title of Earl of Lochaber, thought she’d live a quiet life—marry a distant cousin poised to inherit the chiefdom and just try to blend in and avoid her father’s wrath.

But Rowena, after a decade of abuse that she is sure has stripped her of any worth in the eyes of God, just as she has lost all worth in the eyes of her father, reaches a breaking point in the opening pages of the book. After being attacked by the man she thought she’d marry, she has a decision to make: she can go quietly along as she has always done and watch herself shatter and crumble and turn into the broken creature her mother had been, eventually taking her own life…or she can do the unthinkable and challenge her father’s word.

It was a difficult balance to strike as a writer. Here I had a character by all accounts broken, who had been so systematically stripped of her own self-worth that she is sure she is underserving of any happiness that may find her. But no reader wants a book about someone pathetic. Rowena had to have a backbone, even if she was unaware of it. She had to have hidden strength. And she had to find ways of defying her own opinion of herself too.

To look at her, no one would think she was anything but quiet, even a little backward socially. She doesn’t have the gusto and undaunted personality of Brook, heroine in the first novel in the series. She doesn’t have the bright optimism and romance-seeking bend of her friend Ella, who will take the stage in the final book. But what Rowena has, aside from veins full of stubborn Scottish blood (I’m allowed to say that, having some of it myself!), is the steely determination to be something other than what her father and her former beau had made her. To discover who she is apart from them. To learn if it’s perhaps true that God still hears her, that He has moved to save her, even when she thought all hope was lost.

One of the themes of the book is the lesson that ultimately delivers Rowena to a place of peace, even as she fights for her right to live free and whole. That the empty plates on our table, the empty spaces in our lives aren’t a lack—they’re an opportunity for God to fill them, fill us, in ways we could never imagine.

Roseanna M. White pens her novels beneath her Betsy Ross flag, with her Jane Austen action figure watching over her. When not writing fiction, she’s homeschooling her two children, editing and designing, and pretending her house will clean itself. Roseanna is the author of eleven novels, ranging from biblical fiction to American-set romances to her new British series. Roseanna lives with her family in West Virginia. Learn more at http://www.RoseannaMWhite.com. 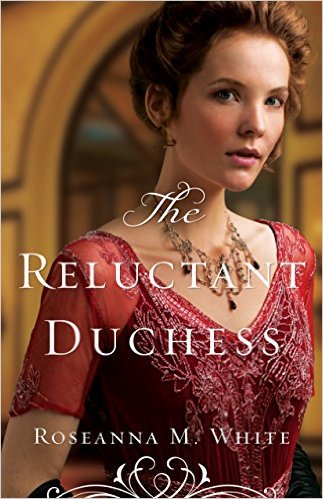 Lady Rowena Kinnaird may be the heiress to a Highland earldom, but she has never felt good enough–not for her father, not for the man she thought she’d marry, not for God. But after a shocking attack, she’s willing to be forever an outcast if it means escaping Loch Morar.

Brice Myerston, the Duke of Nottingham, has found himself in possession of a rare treasure his enemies are prepared to kill for. While Brice has never been one to shy away from manor-born ladies, the last thing he needs is the distraction of Lady Rowena, who finds herself in a desperate situation. But when Rowena’s father tries to trap Brice into marrying his daughter, Brice makes a surprising decision.

The giveaway is open internationally. The Reluctant Duchess releases April 5 2016, and I’m giving away a copy of either it or the first book in the series, The Lost Heiress, to U.S. addresses. International entrees are also accepted for a digital copy (winner’s choice of format) of any of my biblical novels: A Stray Drop of Blood, Jewel or Persia, A Soft Breath of Wind, or you can receive one of the first digital copies of my biblical Christmas story releasing next fall, Giver of Wonders. Enter through the Rafflecopter below:

Posted on April 1, 2016, in Book Giveaway, Guest Post and tagged a lady in defiance. Bookmark the permalink. 47 Comments.