← It’s How You Take Life. You Don’t Let it Take You. Cowboy Wisdom.
Girls, This is a How a Lady Plays Hard to Get to Get What She Wants. →

The First Woman Mayor Ever Elected in America Was No Joke

And so started a joke that launched a sleepy Kansas town to international fame—as the first municipality in America to elect a woman mayor.

In 1882, Susanna Madora “Dora” Kinsey Salter moved with her husband Lewis to the quiet little town of Argonia. The couple managed a hardware store while Lewis sought the opportunity to read law with a local attorney. When things fell into place for him, Dora’s parents moved to town as well to take over the mercantile. Her father, Oliver Kinsey was elected mayor of the hamlet and husband Lewis Salter became the City Clerk. 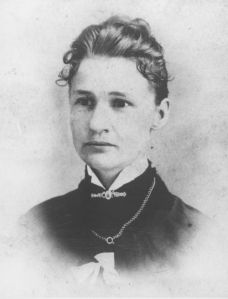 Though busy having and raising children, Dora’s Christians convictions compelled her to support the Christian Women’s Temperance Union. This group was one of the less radical suffragist and temperance organizations in the country, as it mixed Christian morals with equality and compassion. But it was a group that decried alcohol, which didn’t win its members any friends in the drinking population. As a joke, a group of imbibers put Dora’s name on the ballot for mayor in ‘87, knowing she would earn a pitifully embarrassing number of votes.

These men neglected to tell Dora’s husband of the prank. Lewis was not amused when he went to vote and discovered his wife’s name at the top of his ballot.

Even more shocking, Dora won with over 2/3 of the town’s votes.

She accepted the office and Lewis, who again won City Clerk, regained his good humor. He often joked about being “married to the mayor.” The election made international news and a shining star out of the 27-year-old Dora, but it did not ignite her political passions. A year into her term, she announced she wouldn’t run for re-election.

By all accounts, this determined young lady was a fine parliamentarian, wise legislator, and dignified public servant. She went out of her way to work with the all-male town council, carefully soothing over ruffled rooster feathers. But she would probably tell you her finest hour as mayor occurred when she delivered her fifth child.

She loved her town and her causes, but she loved her family more. Though she stayed an active member of the CWTU for many years, she never again “ran” for public office, to the dismay of many suffragists. Perhaps because too many of them expected Dora to think “their” way. Putting family above voting rights offended some big names in the movement. Carrie Nation once scolded Dora for heading off to a football game instead of a meeting. Dora replied, “Not go to the game? Why, I have a son on the team!”

Now that’s A Lady in Defiance.

I’d love for you to join me on https://www.facebook.com/heatherfreyblanton and
https://twitter.com/heatherfblanton

← It’s How You Take Life. You Don’t Let it Take You. Cowboy Wisdom.
Girls, This is a How a Lady Plays Hard to Get to Get What She Wants. →