A Teenage Girl and a Handsome Bandit. The Stuff of Legends and Regrets.

Do you remember your first boyfriend? Was he, perhaps, a bit of a bad influence? Did you follow him into escapades that now leave you wondering in horror, what was I thinking? Cheer up. He probably never shot it out with US Marshals.

Rose Dunn, youngest of ten, was born in Oklahoma and received a formal education from a convent. In the meantime, two of her brothers went astray of the law and started hanging around some pretty tough characters. Sometime in 1892, they brought George “Bittercreek” Newcomb home. Newcomb was a known outlaw who rode with the likes of Bill Doolin and the Wild Bunch. Perhaps this bandit mystique was part of his charm. Either way, at the impressionable age of 14, Rose was in love. 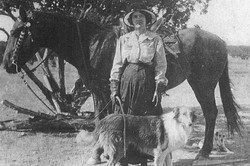 Happily at the beck-and-call of the 29-year-old Newcomb, Rose rode with him when she could, often fetched supplies and groceries from town for the gang, and, after a particularly violent shoot-out in ‘93, lovingly nursed his wounds. As story-tellers have a practice of doing, she was dubbed Rose of the Cimarron. Legend says she managed to get a gun and two belts of ammo to Newcomb as US Marshals were shooting at him, thus enabling him and companion Charley Pierce to escape. The marshals didn’t mention Rose in their reports, however. Admittedly, it would have been more than a little annoying, arguably embarrassing, to confess a fugitive got away because his fifteen-year-old girlfriend interfered.

Regardless, this shoot-out resulted in the deaths of three lawmen, raising the bounty on Newcomb and Pierce to the serious sum of $5,000 each. A price worthy of Jesse James.

Now, while Rose was traveling her outlaw path, ironically her brothers flipped sides and turned into bounty hunters. They weren’t half-bad either. One might even say they were ruthless.

In 1895, Newcomb, accompanied by Pierce, swung by the Dunn family home in Norman, OK to see Rose. It was a fateful decision. Her brothers happened to be there as well. They shot Newcomb and Pierce as the two men dismounted. Why not? The reward said dead or alive.

Whether Rose set him up, which her brothers denied, or Newcomb’s death broke her wild ways, Rose turned over a new leaf. A few years later, she married Charles Albert Noble, a sober, respected man of the community who held political aspirations. Though she would outlive Albert and marry once more, Rose never again crossed the law.

In fact, she spent the rest of her life trying to prove she was not A Lady in Defiance, only a misguided girl who had a little growing up to do. Still, for years after Newcomb’s death, it was not an uncommon site to see Rose riding her favorite horse hell-bent-for-leather across the sandbars of the Cimarron River.