← Sometimes, a Woman Went West … Who Shouldn’t Have … The Good, the Bad, and the Ugly Story
Elizabeth Van Lew — A Daughter of the South With the Spirit of a True Hellion →

Mom Rinker — the Little Ol’ Lady Who Spied for Washington 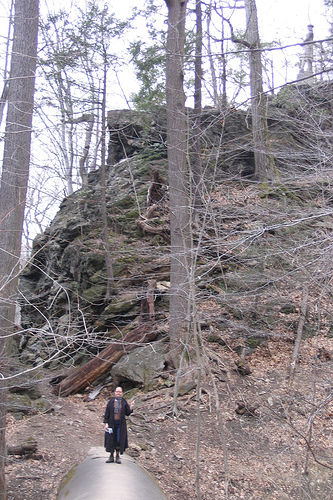 She sat up there at the top.

There is a rock in Philadelphia along the Wissahickon Creek made famous by a little old lady who was one of George Washington’s best spies. No blond bombshell who blinded the British with her shocking good looks, she was merely an innocuous-looking little ol’ lady.

“…For Quartering large bodies of armed troops among us”

Troops could and often did simply move in and take-over a family’s home. Understandably, this didn’t sit well with the property owners who weren’t in favor of the King’s rule in the first place. Molly “Mom” Rinker was one such dissatisfied English subject willing to fight for her independence. She didn’t sit idly by while British soldiers took over her family’s inn and planned their attacks. An older, matronly woman, who would ever suspect her of being a raging patriot and spy?

No one … and she planned to keep it that way. While soldiers banned the male members of her family from the dining area, Mom was kept at hand so she could wait on the redcoats. She waited on them, all right, and made sure to keep jugs of liquor and ale in the dining room so she had fewer excuses for leaving.

Then this clever little Granny-like lady would pass intelligence to Washington’s men. She was never caught; her identity never revealed. So how did she do it?

Each night after gathering her intelligence, she wrote the information on a small piece of paper and wrapped it around a tiny stone. She then wrapped yarn around the stone until she had a normal, mundane looking ball of yarn. Every day, Mom would go to a lovely little spot along her favorite creek and seat herself on a rock. From this rock, she had a pleasant view of the woods.

She would then subtly drop the ball of yarn and watch it roll down the small cliff. One of Washington’s men would retrieve the note and disappear into the brush. No one was ever the wiser. The British never saw her converse with anyone. Granny sat upon her rock and knitted stockings for her beloved Colonial soldiers. She couldn’t be the spy; had to be someone else.

The British never even searched her basket. Probably wouldn’t have found the messages anyway. Not all spying during the American Revolution required complicated cloak-and-dagger techniques. The beauty of this deception was its simplicity, an idea born of wisdom and experience. Talk about a woman who could truly say, “Mom knows best.”

← Sometimes, a Woman Went West … Who Shouldn’t Have … The Good, the Bad, and the Ugly Story
Elizabeth Van Lew — A Daughter of the South With the Spirit of a True Hellion →

Leave a Reply to Lady of Winchester Cancel reply